Coyotes in Arlington: What We Can Do to Keep Ourselves, and These Coyotes, Safe 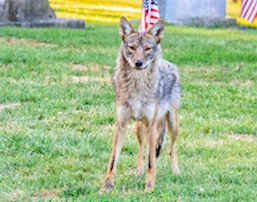 Coyote attacks are very rare in Arlington, but on occasion they do happen. Eastern coyotes, the breed of coyotes most common in the Northeast United States, are very adaptable animals. Since migrating here from the western part of the U.S, they have thrived in their habitats throughout Massachusetts, including here in Arlington. According to a Boston Globe article, state officials estimate that around 11,500 coyotes live in Massachusetts alone, and the Arlington area is a popular coyote habitat. So how can we maintain a safe balance between ourselves, our community, and coyotes?

In the evening of September 5, 2021, two young children were attacked by a coyote in their yards just 10 minutes apart in Arlington Heights. The APD (Arlington Police Department) responded to both these attacks, where the victims received non-life threatening injuries. The same coyote was believed to have been responsible for both incidents. These recent attacks left people wondering if their pets, or even their children, were safe, even in their own backyards, and what could be done to prevent attacks like this from happening again.

In an effort to further educate the public about coyotes after these attacks, the Arlington Health Department invited former Belmont Animal Control Officer and coyote specialist John Maguranis to lead a virtual seminar about coyote safety in October. During the seminar, he gave information on coyotes in general, and tips on things such as co-existence with coyotes, keeping pets and other animals safe, and hazing (methods of deterring threatening animals). Mr. Maguranis mentioned that coyotes are “opportunistic feeders,” who prey on most animals given an opportunity. “They’ll only prey on pets if given the opportunity, which means the days of letting your little dog out in your backyard, you know, at 2:00 in the morning for five minutes to go to the bathroom, are over.” Instead, he advised, “you have got to be with your [pet], that’s just the way it is.”

He also mentioned some interesting facts about coyotes, remarking, “You may see coyotes up in trees, believe me, it happens!…We used to say the only canid that climbed trees was a gray fox, but now we know that the mighty eastern coyote can do the same thing.”

Local wildlife expert and enthusiast Linda Schwartz, who has worked at the Franklin Zoo in Boston and the Live Animals Center at the Museum of Science, spoke in an interview with the Ottoson Insider about coyotes in Arlington. “They like open spaces sometimes, to hunt,” she remarked about the local coyotes, mentioning how the Winchester Golf Course, Mt. Pleasant Cemetery, and Horn Pond were all places around the Arlington area where she had seen them.

Ms. Schwartz also gave some pointers on hazing, saying, “It would probably make you feel safer, especially if you have a dog with you, if you carried some pepper spray, or something….When you see a coyote in your yard, or if it gets close to you, you should make lots of noise and make yourself look big….and do it until it leaves the area.” Ms. Schwartz described an instance at an Arlington cemetery, where a little boy ran away from a coyote which started chasing him, understandably scared. She remembered, “the boy, he must’ve been about 10, kept running, and, you know, I kept yelling at him not to run because of course, when he ran, the coyote ran”. Ms. Schwartz then went and stood between the coyote and the child to let him walk away safely, keeping the coyote at a distance.

One thing Ms. Schwartz emphasized was that the coyotes are not trying to hurt people. “The incidents where the kids have been hurt were likely because somebody has been feeding a coyote and it’s gotten a little too bold,” she said about the recent coyote attacks. This has also been stressed by many coyote safety sources, including the Arlington Animal Control “About Coyotes” page, which can be found at the Arlington, MA town website. “It’s probably a young coyote, it’s probably one that’s hurt those two kids…and has come to depend on people too much,” Ms. Schwartz said about the coyote who was behind the recent attacks. “Really, a coyote just wants to be left alone.”