Twenty Years Later, Many Americans Still Question Afghanistan’s War and its Connection with 9/11 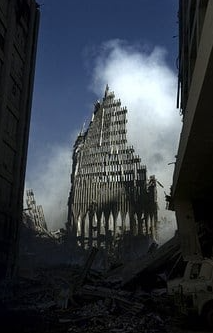 The destruction at the twin towers//Image credit: Pixabay.com

On the morning of September 11, 2001, coordinated terrorist attacks carried out by al-Qaeda, an Islamist extremist group, hijacked four commercial airplanes with passengers on board. The first two planes hit the upper floors of the North and South Tower of the World Trade Center Complex where thousands of people were working. Another plane hit the Pentagon in Arlington, Virginia. On the fourth hijacked plane, Flight 93, the passengers fought heroically back after hearing about the other attacks and the plane crashed into an empty field in western Pennsylvania about 20 minutes away by air from Washington, D.C. Lieutenant Heather Penneyan, an F-16 pilot who was ordered airborne that day, stated, “The real heroes are the passengers on Flight 93 who were willing to sacrifice themselves.”  That day, 2,977 people from 93 nations were killed. 2,753 of those people were killed in New York. Many people remember this traumatic day as 9/11. Twenty years later, the bloody war with Afghanistan that started less than a month after 9/11, has come to an end.

On September 18, 2001, President George W. Bush signed a joint resolution authorizing the use of force against those responsible for attacking the US on 9/11. The support for the war in Afghanistan continued at a high level for several years. In a survey conducted by the PEW Research Center a few months after the war started, 83% of Americans said they approved of the United States-led military campaign against the Taliban, an Islamic fundamentalist group, and al-Qaeda in Afghanistan. Several years later, in 2006, 8 out of 10 adults said they made the right decision in approving the use of military force in Afghanistan. But, once Osama bin Laden, the leader of al-Qaeda, was killed in 2011, the public support for withdrawing the U.S. troops from Afghanistan increased.

In August of this year, President Joe Biden addressed the nation, announcing the end of the war and that the United States was to  remove all the U.S. soldiers from Afghanistan. President Biden stated, “What is happening now could just as easily have happened five years ago or 15 years in the future.  We have to be honest: Our mission in Afghanistan has taken many missteps… over the past two decades. I’m now the fourth American President to preside over war in Afghanistan — two Democrats and two Republicans.  I will not pass this responsibly on… to a fifth President. I will not mislead the American people by claiming that just a little more time in Afghanistan will make all the difference, nor will I shrink from my share of responsibility for where we are today and how we must move forward from here.”

The attack on the Twin Towers caused American citizens to be terrified of another terrorist attack, causing the U.S. to declare war on Afghanistan. This war became the longest war in U.S. history. Now that the war is over, many people are wondering if the war was really worth all the lives lost in all the damage it caused to Afghanistan, and the loss of over 387,000 civilians that were killed as a result of fighting.